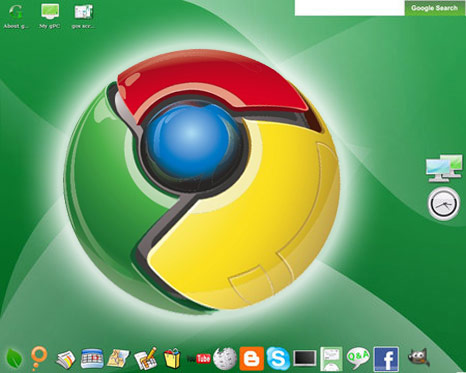 It has been difficult for Google to explain away the seeming conflict between Chrome OS and Android.

Saying that Chrome is for the Internet and Android for devices, requires a belief that users actually make the distinction.

Google’s Sergey Brin They don’t and Google knows it, but only co-founder Sergey Brin can say so.

In this case, it is the Emperor seeing his subjects’ new clothes. Or the profound lack thereof.

(And if you haven’t seen Chrome OS, here is our visual tour).

Following the Thursday’s Chrome OS announcement, Brin informally told reporters that the two operating systems were “likely to converge over time,” but offered no specific timetable.

His remarks didn’t seem important at the time and were briefly lost in the excitement of the new OS. Today, however, people who heard the remark realized Brin actually said something important. And it undermines the whole Chrome OS concept.

Brin cited the common Linux OS and WebKit browser heritage the two operating systems share as an example of forces driving them together.

During the presentation, other Google execs described a “perfect storm of converging trends” that somehow required it to develop and support two separate operating systems.

I had already wondered what the difference would be between Android and Chrome when installed on a netbook. Given the Chrome browser, wouldn’t Android do all the same things Chrome could do, plus run Android applications?

Isn’t that what users really want? A s opposed to an operating system only capable of running a browser and connecting to Internet-based applications?

It is easy to understand why Google wants to keep Chrome OS and Android separated in our minds: Chrome OS seems revolutionary, if a bit far-fetched. Android, by comparison, is the evolution of what are already doing.

In reality, Chrome OS is a subset of Android, Windows, Mac OS, and Linux. It’s the new Lite OS, faster and less filling.

However, merge Chrome and Android and you end up with Android.

It will be hard for Google to keep people from noticing what a good idea that is. An idea that in some ways cuts the legs right out from under a standalone Chrome OS.

According to the Sources are reporting that the Mac OS X 10.6 Snow Leopard documentation says Intel is the only processor type supported by Apple’s latest OS X iteration, with at least 512MB of RAM being required as well.The next version of Mac OS X is code-named “Snow Leopard,” and will indeed be Intel-only, we have learned. This info is hot on the heels of about Mac OS X 10.6 being as soon as Macworld 2009 and being Intel-only.

According to our favorite computer manufacturer in Cupertino Apple Insider is reporting that Snow Leopard is indeed aimed at Intel Macs only. Documentation revealed at Apple’s Worldwide Developer Conference this week proves it.

According to Apple, Snow Leopard delivers unrivaled support for multi-core processors with a new technology code-named “Grand Central.” The company claims this is its answer to the multiple-core problem developers have always stumbled upon. Grand Central is supposed to make it easier for devs to create programs that take full advantage of the power of multi-core Macs.
Open CL is based on C (programming language) and has been proposed as an open standard, according to the Cupertino-based Mac maker. Apple has made it clear that Snow Leopard raises the software limit on system memory up to a theoretical 16TB of RAM, emphasizing OS X’s focus on 64-bit technology as well.
People familiar with the situation have confirmed to us that TUAW’s details are true—Snow Leopard is currently on track to come out during next January’s Macworld, and it will not contain major OS changes. Instead, the release is heavily focused on performance and nailing down speed and stability. With Apple’s current (and future) focus on smaller, thinner, and more mobile devices, this move makes perfect sense. Things like the MacBook Air, iPhone, iPod touch, and other mysterious devices that have yet to be announced need better performance for better battery life, and that’s definitely something Apple wants to excel at in the years to come. Our sources did not note whether Apple planned to discuss Snow Leopard at this year’s WWDC.
Something else that may happen is that Apple may eventually wrap everything in Cocoa—things that are currently only Carbon accessible will be no longer. This should make many Objective-C programmers happy, although those who are married to Carbon may get a bit bristly at the news.
Code Of Conduct | Nintendo Wii U